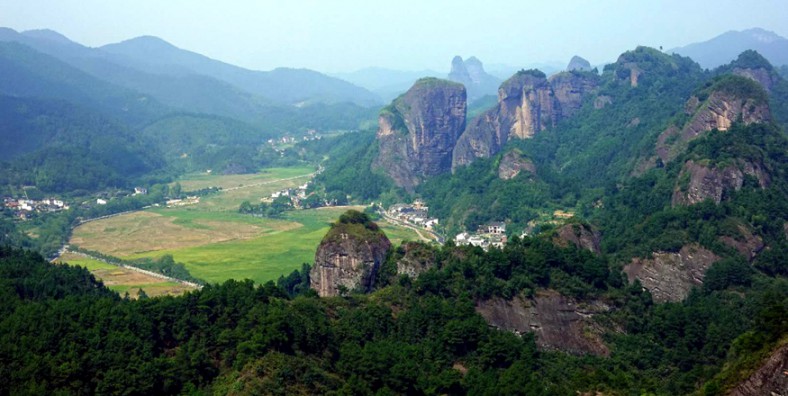 It contains 3 large natural bridges: the Natural Bridge, the immortal’s Bridge and the Brush Rack Hill Celestial Bridge. Among them, the first, 64 m in span, 20 m in height, 14 m in width and 5 m in thickness, is a bridge of one arch formed by a huge rock that collapsed from the neighbouring preci Among the 10 lanes narrowed by precipices, the best-known is a crevice in the Ox Nose Fort 9 km southwest of the county town. Squeezed by 2 precipitous peaks that are 150 m high, the winding passage is 238.8 m long, 80 to 120 m deep and only 2 feet wide, just enough for small people to make a way one by one. Looking up, amazed visitors can only see a thin ray of sunshine. Hence, it has recently been reputed as”No. 1 Lane in the World The eight cornered Fort, the summit of the whole scenic area, is a steep towering peak with 8 corners pointing in various directions. Its top is a woody terrace, in the heart of which a spring miraculously oozes out from an unknown source-“rain in time”indeed.

Other wonderful sights, such as the general-like Rock, the candle like Pinnacle, the Jade Spring Hill and the Five Fingers Hill are also breath-takingly beautiful. Now Mt Lang has become a national geological park, and has been inscribed by UNESCO in the List of World Natural Heritage along with 5 other scenic areas of red nephelinite in China Crafts and Specialities Shaoyang is a land of handicrafts. Its yellow bamboo carvings used to study of men of letters. Since the bamboo vase” Lotus Leaves”won a silver medal at the 1915 be necessities for the International Fair in Panama, its bamboo engravings have won medals in every fair at such a level .Its bamboo sereen carved witl ve eight best known scenes of ancient Hunan is even fixed in the room of Hunan in the Grand Meeting Hall of People,’s Congress. The lattice carving is another brilliant star of the realm of artistic sculpture. As people in North China tend to decorate their windows with papercut, the locals here like to carve in relief all kinds of flowers, fruit, dragons and phoentxes on their lattice windows. Their carvings are usually done with techniques of the fine chinese brushwork