Changde,formerly called Wuling or Dingcheng, is located in the northwest of Hunan, bordering on the Dongting Lake on the east, the province of Hubei on the north, West Hunan Autonomous Prefecture on the west and Yiyang on the south. It has under its Jurisdiction 1 city, 2 districts, 6 counties and 7 state-run farms, with an area of 21894km and a population of over 6000,000. The city of Changde is a key city in the west of the vast alluvial plain around the Dongting Lake.

Its output of grian, cotton and oil ranks first in Hunan, making it a major base for the production of such commodities even in the whole country. Its production of fish, pigs, oranges, tobacco and sugarcane also holds an important position in the province. In the dense forests in its west, there is a good stock of such rare trees as the Chinese dove tree, gingko and camellia,and such precious animals as South China tigers,clouded leopards and rhesus monkeys. Among its ores, the deposit of realgar is the biggest in China, and gold and diamond are mind from the Yuan River which is thus known as Golden Water River. 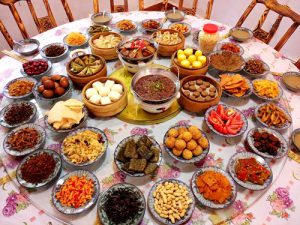 Leicha Tea is a local flavor in Taohuayuan—a famous scenic spot in China. Its main ingredients are rice, ginger and tea. It is not only delicious but also beneficial to health. The procedures to prepare Leicha Tea are as follows: First, you put clean ginger, good green tea soaked by water and half-fried rice together into the earthen bowl; then, you pound them into syrup with pestle; last, you put syrup and a little salt into tea bowl and dilute them with boiled water. After that, you can enjoy this delicacy. 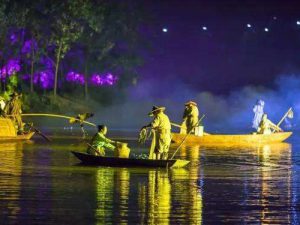 Other Destinations in Changde

Located in the northwest of Hunan Province, Changde is close to Zhangjiajie to the West , Most of people who visit Zhangjiajie would like to spend one day or half day in Changde to visit the Taohuayuan Peach blossom. normally , we have a Changde tour with Zhangjiajie Fenghuang , Changsha city. Read more tours About Changde. [...]

With a long history and rich culture dating back to the periods of the Xia and Shang Dynasties three thousand years ago, Changde is one of the cradles of Xiangchu Culture. Changde Poets Festival, with the first title of “the Chinese Poetry City” endowed upon Changde by the Chinese Poetry Association, has a close association with the spectacular Poem-engraved Wall. The wall is 3 kilometers long, with 1267 poems spanning five thousand years and 43 Chinese and foreign stone carvings [...]