Huaihua, also known as Hecheng and Wuxi，national comprehensive transportation hub city, wuling mountain economic cooperation zone center city. It has been known as “the gateway of Guizhou and Yunnan” ，since ancient times. The Song dynasty established the name of huaihua by means of huairou naturalization. Huaihua, located in the south-western part of hunan province, has a permanent population of 4.96 million (2017). With a total area of 27,564 square kilometers, it is the largest prefecture-level city in hunan province. The city has jurisdiction over one municipal district, five counties, five autonomous counties, and takes charge of one county-level city.
Huaihua is a “multi-ethnic cultural village” with ethnic minorities accounting for 40 percent of the total population. For a long time, 50 ethnic groups such as dong, miao, yao and tujia have lived and thrived here, creating rich and colorful folk cultures.
Huaihua has an excellent ecological environment. Located in the transition zone from central Hunan hill to Yunnan-Guizhou plateau, the city’s forest coverage rate has reached 70.97%, ranking the first in Hunan province. It is one of the nine ecological regions in China and known as a “breathing city”. Huaihua is the first municipal “national ecological demonstration zone” in hunan province officially named by the ministry of environmental protection. The location of huaihua is relatively superior. It is a central city in the border areas of Hunan, Hubei, Chongqing, Guizhou and Guangxi provinces and an important comprehensive transportation hub in China. It is the intersection of the two major economic belts in hunan province and one of the three poles of economic growth identified in the 13th five-year plan of hunan province. railway traffic in Huaihua was developed, so it is called”a city towed by train”.

Other Destinations in Huaihua

Qianyang Ancient Town，located in qiancheng townof hongjiang city, it is one of the best-preserved ancient cities in Ming and qing dynasties, surrounded by water on three sides. Wanfo Mountain,the main body is located in tongdao dong autonomous county, which is a national scenic spot and AAAA scenic spot, adjacent to guilin, a famous tourist city in China, and has been included in the "big guilin" tourism culture circle. Formerly known as yingfeng mountain, a typical danxia landform, it was once selected [...] 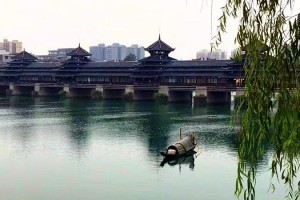 Festival： Mayang lantern show Dragon Boat Festival，dragon boat racing is popular in yuanling county on this day Culture and Tradition Nuo opera, an ancient opera Spread in huitong, hongjiang and other places Lusheng dance of dong minority, It is a traditional folk dance of the dong people. It originated from the ritual dance of praying for harvest before sowing and thanking god for gifts and offering sacrifices to ancestors after harvest in ancient times. [...]